Crypterium: how does a cryptobank work? 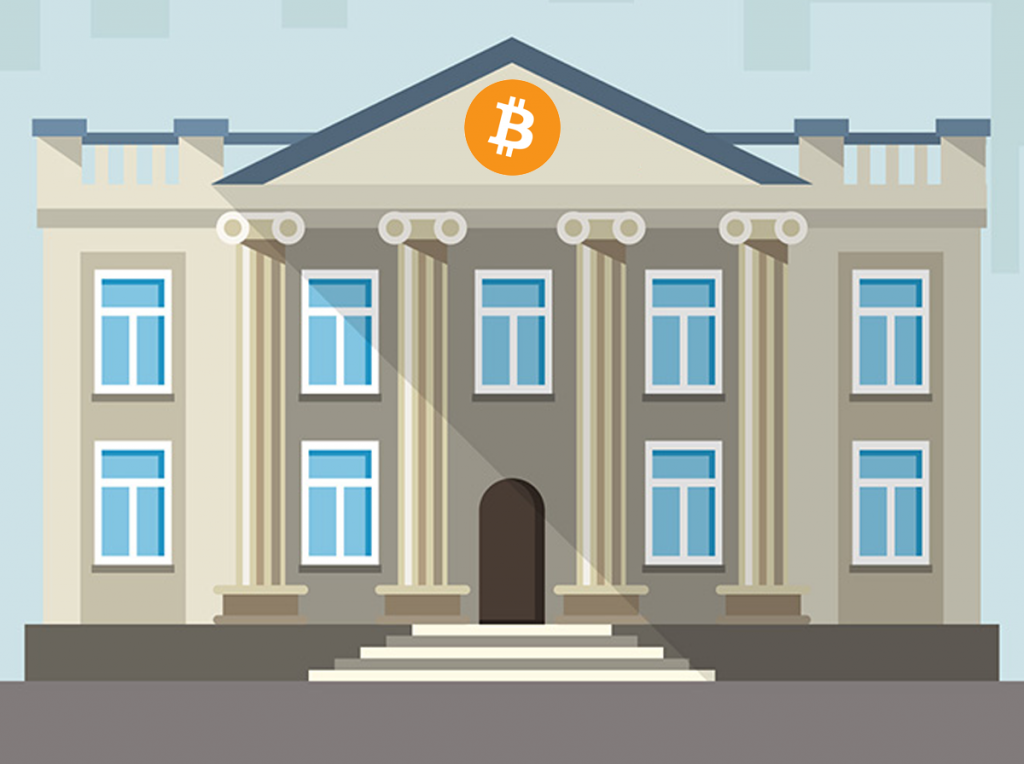 Crypterium (as company registered in Estonia, operating worldwide) is to launch the Crypterium cryptobank in early 2018. The bank will perform traditional banking operations, except instead of just the money we all use today, it will also work with cryptocurrencies.

Crypterium will hold an ICO starting on 31 October 2017. Crypterium's founders aim to collect up-to USD 75 million over the course of the ICO. These funds will be the bank’s starting capital, which will be publicly launched as early as QI-II of next year.

The four core elements of the project are: a mobile bank, cryptocurrency acquiring, an OpenAPI cryptocurrency transaction platform for developers, and decentralized crypto lending, but, as Crypterium COO Gleb Markov told PLUSworld.ru, the key element is the cryptobank.

Why do we need a cryptobank?

According to Gleb Markov, the idea to create the company arose from the realization that there was a very serious problem – the popularity of cryptocurrencies has led to them accumulating in the hands of users that have very limited possibilities to spend them. Right now, cryptocurrencies can only be used as a means of payment in a small number of retail and service outlets, while the ability to convert them into fiat (fiat is normal money in traditional currencies like the US dollar) currencies exists only on the cryptoexchanges, which is an inconvenient, lengthy and expensive process.

All banking operations are possible in absolutely any currency, anywhere in the world. The mobile bank will instantly convert a cryptocurrency into fiat money and vice versa.

The cryptobank will make it easy to convert a cryptocurrency into fiat money and to legally pay, for example, with a digital currency such as bitcoins, even when those vendors who do not accept digital currency.

How does it work?

First and foremost, the Crypterium bank is a mobile app that will provide a set of payment services to its clients, including the issue of virtual cards for payment systems (with the participation of our partner banks). All banking operations are possible in absolutely any currency, anywhere in the world. The mobile bank will instantly convert a cryptocurrency into fiat money and vice versa.

Project developers pay special attention to crypto2fiat. They believe that this store service option could have a fundamental impact on the market.

The cryptobank provides access to all three categories of cryptocurrency wallets: bitcoin, altcoin (the best known of which is Ethereum) and digital assets, including the ICO tokens of outside projects (if they are openly traded on public exchanges).

After registering an account, customers can transfer their cryptocurrencies to the cryptobank. The balance will be shown in the fiat currency (US dollars, euros, rubles, etc.) chosen by the customer at Crypterium's current exchange rate.

To perform transactions with cryptocurrency in retail chains and payment systems, clients will be issued a virtual Visa, Mastercard or UnionPay card with the required details, and the mobile services Apple Pay, Samsung Pay or Android Pay will be activated. This will take seconds and be ready to use instantly. This will make it possible not only to pay through both ordinary POS terminals that support PayPass, payWave or QuickPass and websites that accept bank cards, but also to withdraw and deposit cash at ATMs that work with contactless payments systems. 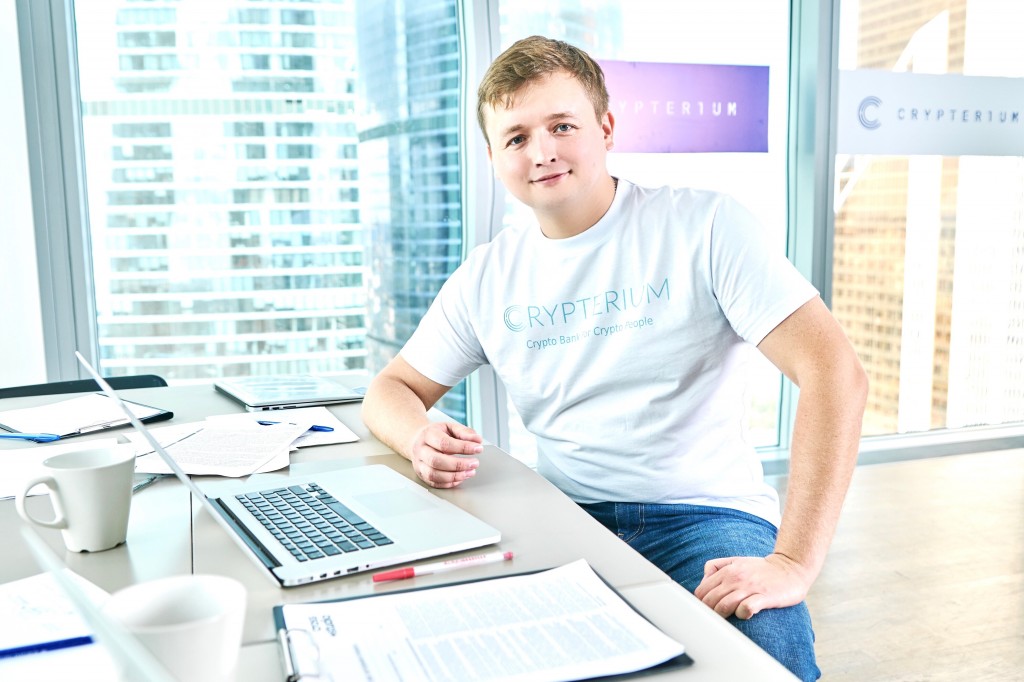 Focus on developing its own ecosystem

The use of the existing infrastructure of payment systems is not essential and is only necessary during the early stages of project development to ensure that Crypterium can immediately be used in thousands of retail and service companies around the world.

To use the loan funds, the sub-tokens must be swapped for bitcoins from exchange participants on the cryptobank's own exchange. However, the loans will have to be repaid using these same sub-tokens.

Since the bank ensures the acceptance of cryptocurrencies, but conventional money is received on the seller's account, there will no longer be any obstacles (organizational, legal and accounting) to the acceptance of cryptocurrencies by the retailer. In this case, Crypterium works like a pawn shop at the level of the user (independently buys his cryptocurrency for a fiat currency at the cryptobank's exchange rate, after which it redirects the user's fiat currency to the retail points of sale on the instructions of this user), but does not use cryptocurrency in its contractual relations with recipients of cash. This makes it possible for Crypterium to work with any retail and service outlet, including eBay, Amazon and AliExpress, since now the funds being received from the cryptobank do not differ from payments processed by, for example, PayPal.

“Right now, cryptocurrencies are not the financial instrument of choice for paying for the most routine purchases. To use a bitcoin wallet to pay for a coffee, for example, you would have to send BTC to the exchange for conversion, wait while three confirmations are processed, sell the bitcoins, and after a while, and at a substantial loss, you would be able to transfer the fiat funds to your card. In some cases, there would be an actual person acting as a courier, who would be responsible for the movement of your money from point A to point B. This falls short of our idea of the current possibilities of blockchain technology and the cryptoeconomy. We are offering something that is much more than a multicurrency cryptowallet – a system for performing operations in which hours of waiting are transformed into five seconds, with no daily limits and no need to wait several weeks for a plastic card to be issued," comments Vladimir Gorbunov, co-founder and CCO of Crypterium. 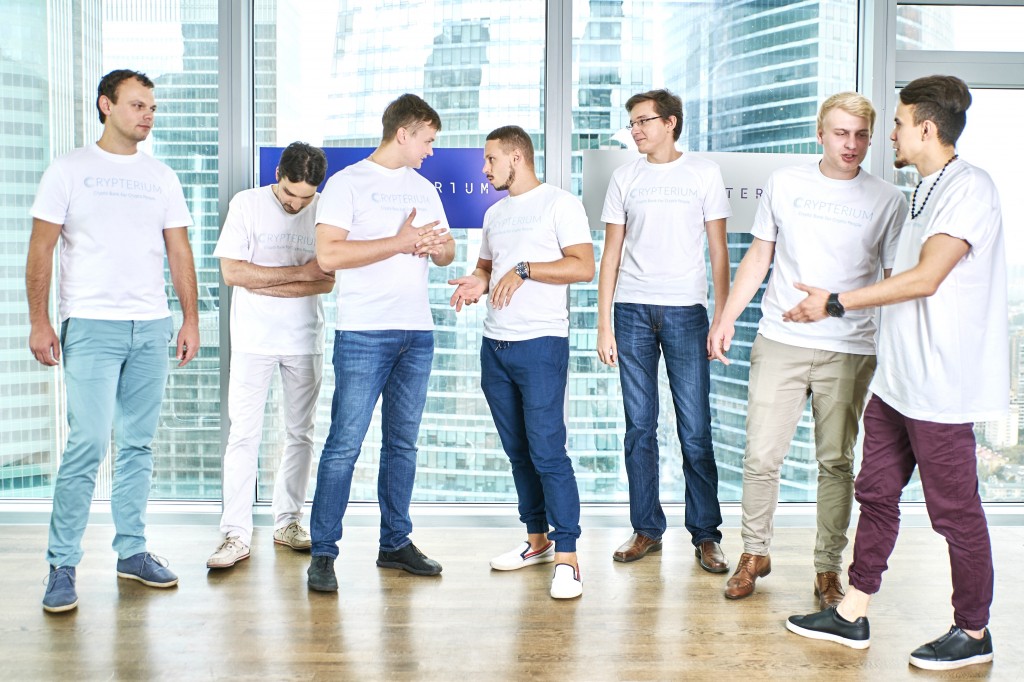 Crypto loans. How are they different?

Crypterium plans to develop cryptocurrency lending through specially created credit sub-tokens (not to be confused with the project's main ICO tokens). Customers will borrow the sub-tokens, which themselves are converted into Bitcoins then cash of the customer’s choice on the company’s own internal exchange. When the loan repaid, it must be repaid in the same sub-tokens that were initially borrowed, meaning that the borrower will have to once again visit the specialized internal exchange to perform the reverse transaction (to exchange bitcoins for credit sub-tokens of Crypterium from exchange participants). In the meantime, the value of the sub-tokens may have changed. Therefore, a sort of autonomous decentralized financial system is formed in which the bank does not participate, but through which its participants can receive benefits. Crypterium only provides the algorithm on the basis of which, using scoring of borrowers and system statistics, decisions are taken on the issue and terms of new loans, as well as decisions on possible additional issues of credit sub-tokens – all using complex mathematical formulae that support the regular but gradual growth in the value of the sub-tokens on the exchange established for crypto lending. These formulae consider, among other things, the percentage of loans repaid. As a result, borrowers can easily receive quick loans at rates below those offered by banks.